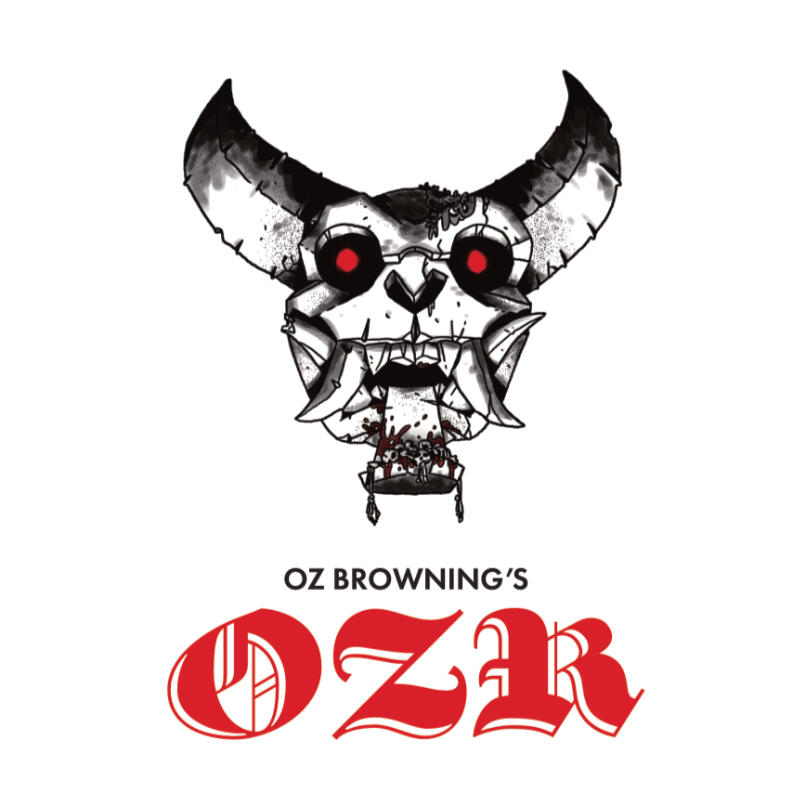 If you're a player

If you're the ref

Words and layout by Oz Browning.

Development and editing by Matthew K.

Illustrations by Bert of Bertdrawsstuff.

Get the complete version in PDF format at itch.io and in print at Rook's Press, printed by Footprint Workers Co-op.

OZR borrows ideas from 2400 by Jason Tocci, Freebooters on the Frontier by Jason Lutes, Into the Odd by Chris McDowell, Mausritter by Isaac Williams, So You Want To Be An Adventurer? by Jared Sinclair, and a bunch of old editions of D&D.

Lines and Veils were created by Ron Edwards, and the TTRPG Safety Toolkit was compiled by Kienna Shaw and Lauren Bryant-Monk.

The OZR logo is set in a modified version of Avebury, the headings in Obviously, and the body in Futura PT.

The text of OZR is licensed under CC BY 4.0.

Version 1.1. See the devlog for details.

You may find graph paper useful for drawing maps.

If you’re playing remotely, a whiteboard app or virtual tabletop can be useful, but neither is required.

Discuss the tone and theme of the game until everyone is comfortable and on the same page.

If you want some extra support consider using safety tools to skip over, shut down, or address harmful topics.

A good place to start is to establish lines and veils.

Lines are topics that you agree in advance to exclude from play, whereas veils are prompts to fade to black when certain topics come up.

For more on safety tools, search online for the award-winning TTRPG Safety Toolkit.

But keep in mind that safety tools aren’t substitutes for kindness and respect.

One person takes the role of referee, describing a strange and dangerous world, and the others—the players—take the roles of characters exploring it.

If you’re a player, start by making a character. Work together with the group to tie your characters together, and to the world.

If you’re the referee, prepare for the first session of play.

Once everyone is happy with their characters, and the referee has an idea of how to begin, you’re ready to play. 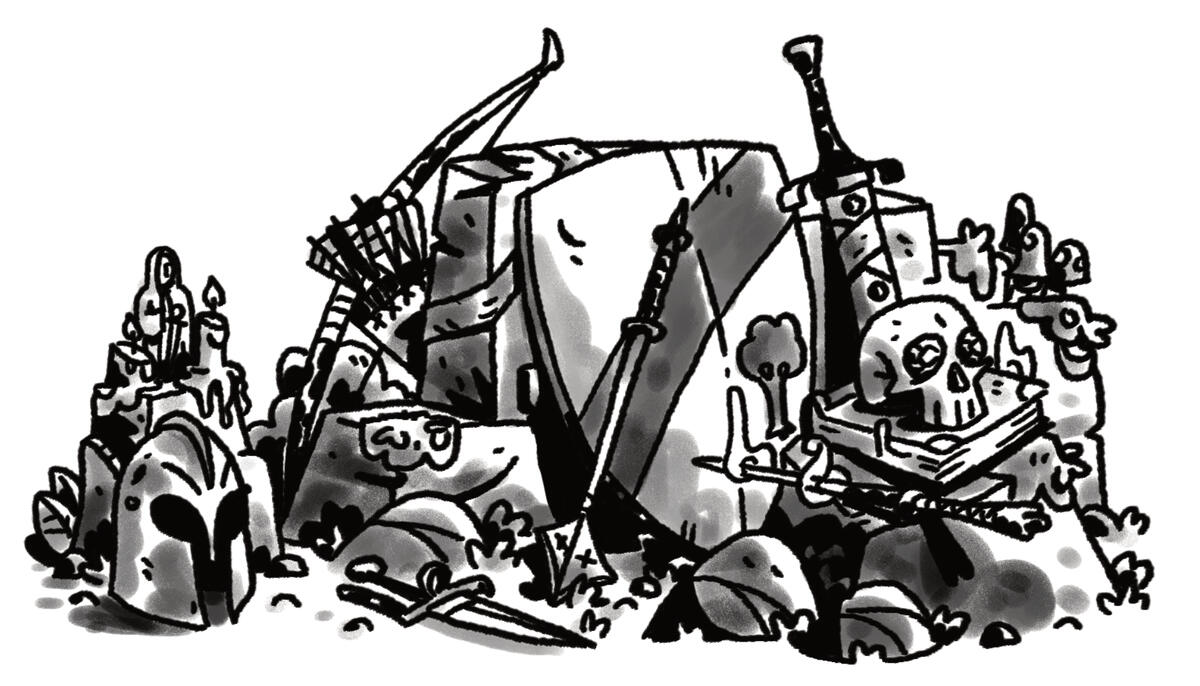 If you're a player

You are an adventurer, brave or foolish, willing to march (or creep) into danger in search of fame and fortune.

You’ll start with a trait, a weapon, some equipment, and a little luck.

You start with 1 trait.

Your traits set you apart from your companions.

They describe what you’re good at, what options you have to avoid danger, or maybe just the first thing people notice about you.

You start with 6 torches, 1 week of rations, a weapon, and 3 additional pieces of equipment.

Some example items are listed below. They all have a cost, given in c, for coins (or cabbages).

Certain items such as armour, shields, and weapons can be broken to avoid injury or death. Broken items are not useful until they are repaired or replaced.

You start with 1 luck.

Luck improves your odds when you make a save, and can be spent to avoid injury, exhaustion, or death.

Your luck will improve with experience.

Choose a name, pronouns, and describe your look. Now you’re ready to play.

The referee will describe the situation. Ask them questions to clarify anything ambiguous before continuing.

Say what you do and how you do it.

The referee might ask you to clarify what your intent is, if it’s unclear.

If you attempt anything dangerous the referee will explain the consequences of failure and ask you to make a save.

The referee will then describe what happens next, and the game continues. 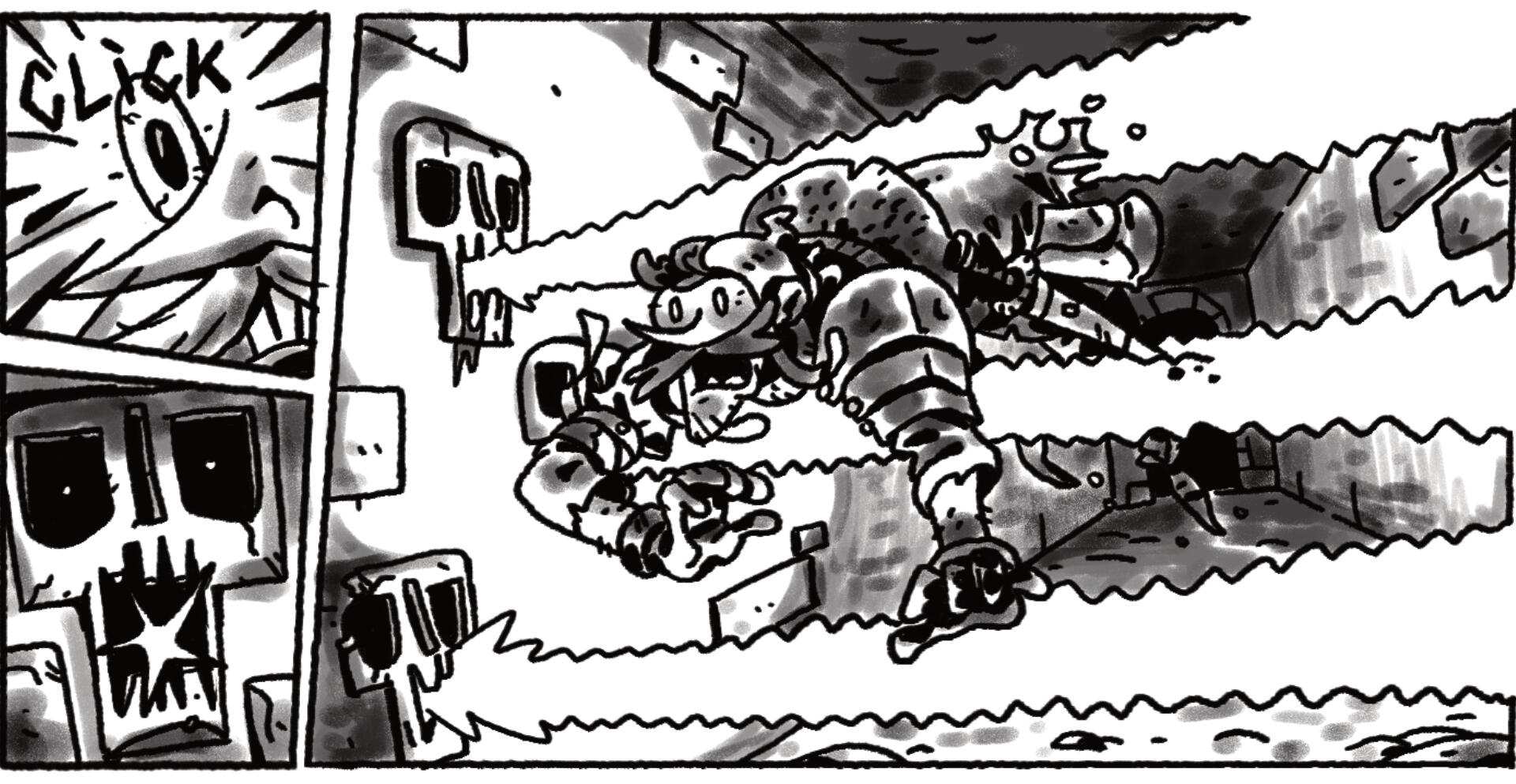 If the referee asks you to make a save, roll a 6-sided die to try and avoid danger.

If you roll equal to or under your current luck you succeed, otherwise you fail and face consequences such as injury or exhaustion.

If you have an obvious advantage—such as a relevant trait, useful item, or help from a friend—roll 2 dice and take the lowest result.

If an action is uncertain, but not dangerous, talk it through as a group instead of making a save. Flip a coin if you can’t decide.

You may reduce your luck by 1 to turn a failed save into a success, or to avoid injury.

Your luck can’t go below 0.

If you engage an enemy in combat, play as normal, describing your actions one moment at a time.

Most actions taken in combat are dangerous enough to require a save.

Each time you’re injured or exhausted, cross out a trait or an appropriate item such as a shield or armour.

If you have nothing left to cross out you die.

Traits lost to injury or exhaustion aren’t useful until you recover. You may still be big or clever but you’re too hurt or tired to benefit from it.

If you die, make a new character and get back to play.

Don’t spend too long figuring out how your new character arrives­—do what’s best for the table, not what’s most realistic.

When you spend a night resting, recover 1 luck up to a maximum equal to your number of traits.

When you spend a week resting with proper care, recover one lost trait.

For every full day you go without food or rest, make a save to avoid exhaustion.

The distance you can travel depends on the type of terrain.

You can travel up to twice as fast if you are unencumbered, familiar with the terrain, or by making a forced march.

If you make a forced march, or travel for more than 8 hours without rest, make a save to avoid injury or exhaustion.

The referee will track time as you travel, and check to see if you have any encounters along the way.

Each session of play you survive earns you 1 xp.

Once you have more xp than traits, you gain a new trait and reset your xp to 0. So your 2nd trait costs 2 xp, your 3rd costs 3 xp, and so on.

Whenever you gain a new trait, you gain 1 luck.

If you're the ref

Spend some time thinking about the world.

Note down your answers, but keep them general. Most world building happens during play, not prep.

If it helps, draw a basic map of your locations.

If you’re using material written by someone else, read it with these questions in mind. Take note of any useful maps or illustrations.

For each location (e.g. a town, a dungeon, a forest) create a list of 6 people, monsters, or unexpected events that the characters might encounter.

Some should be mundane, others strange. Don’t worry about making them dramatic or meaningful.

Give each person and monster up to 6 characterful traits and a brief description including their wants or behaviour, and any interesting equipment they carry.

The more traits, the better they are at avoiding danger, and the harder they are to defeat in combat.

People and monsters have no luck. They make saves using their remaining number of useful traits instead.

When they’re injured, cross out a trait or appropriate item as usual.

Convert monsters from other games by giving them a number of traits equal to their hit dice (HD) up to a maximum of 6.

Mark 1 exploration turn each time the characters act slowly or carefully, and 1 for every 10 minutes spent resting.

When you mark either an exploration or travel turn roll a 6-sided die. If you roll a 5 or 6, consult your encounter table for that location for more detail.

Don’t roll for turns spent in safety. Instead agree the time that passes in hours or days, as appropriate.

As characters explore the world, describe what they can see, hear, and smell, and what they might infer from contextual clues. If something is obvious, let it be obvious.

Use relative positions—ahead of you, to your left, above you—to give the players a sense of the space.

When the characters move slowly, encourage the players to draw a map. When they’re in a hurry just explain the basics and let them keep moving.

Consider how each character’s traits might affect their perception of their surroundings.

Always make the consequences of failure serious, and signal the risks to players. Encourage the players to look for less dangerous solutions if they don’t like their odds.

If your game includes magic you should discuss it briefly as a group.

Consider what magic is capable of, how to use it, and what it costs.

Magic is mysterious and usually dangerous enough to require a save.

This text includes a sample spellcasting system based on other OSR games for your convenience. 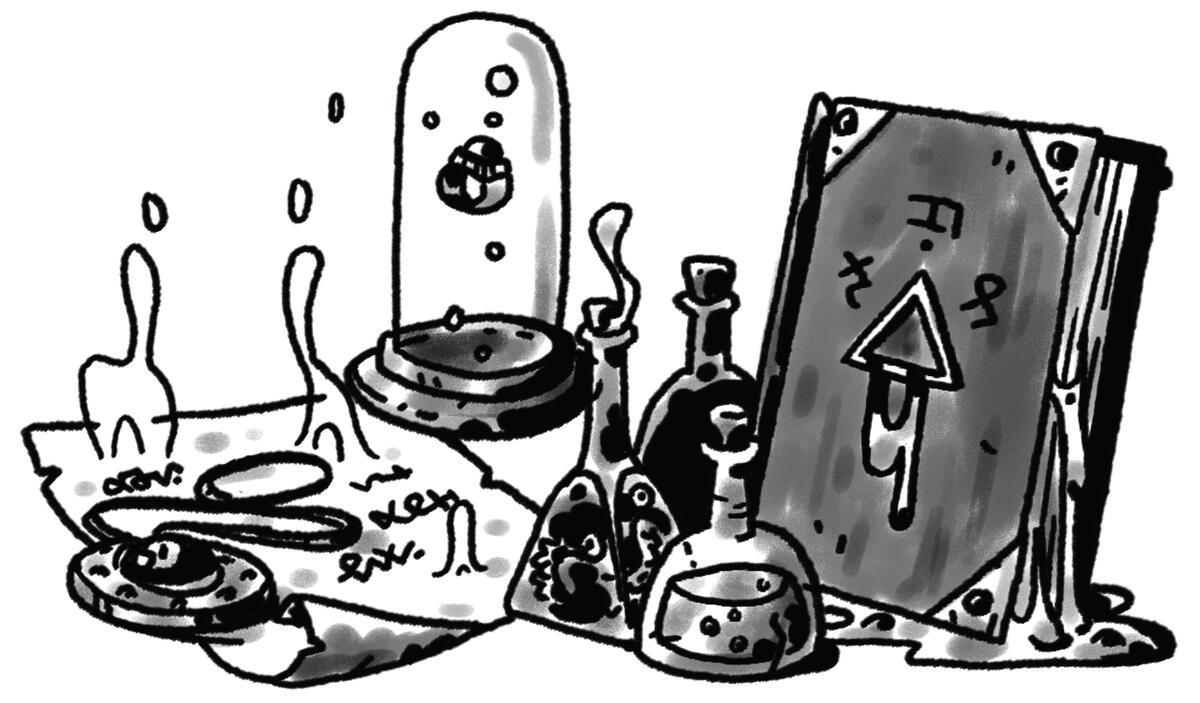 Characters with an appropriate trait may start play with a spell instead of a weapon.

New spells can be learned with training or careful study of rare spellbooks or scrolls.

Spells are grouped into orders. To cast a spell you must spend luck equal to its order and make a save to avoid a proportional psychic injury.

You may spend additional luck to increase a spell’s effect, range, duration, or injury for that casting.

Agree each spell’s effects with the group, using its name and order as a guide. For example, casting Beguile might make a nearby monster confused for a few moments.